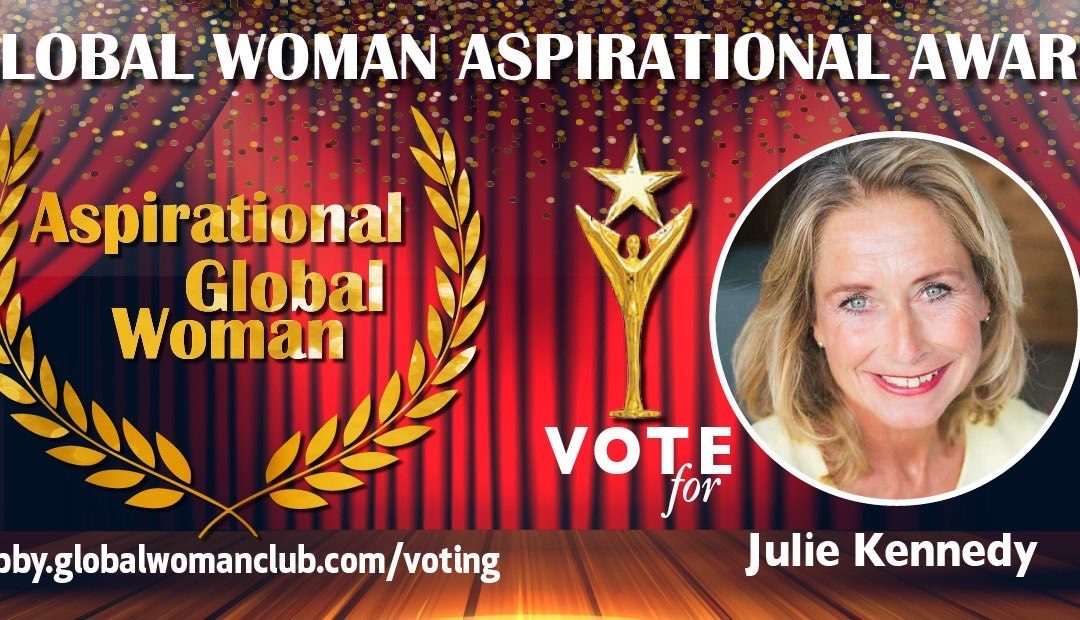 Julie Kennedy: Guided by Her Heart and Passion for Words

“A girl needs to keep some mystery! I am grateful for my name; I believe it has strongly influenced who I became.”
By Kicki Pallin
https://globalwomanmagazine.com/post-detail/15944

She has moved 22 times, lived all over the world, and says that people are her anchors and home is where her heart is. The Communication Specialist Julie Kennedy has most of her life had a desire for independence and a strong belief in women empowerment. She has a background in German, Spanish and Business Studies, and the path of writing has chosen her and not the other way around. Julie believes that the current world crisis has taught us that we are more alike than different, and hope we will not forget in the future what we discovered. How this different kind of challenge brought us closer and made us feel, so we can cherish and continue building on humanistic values.

Could you please share some of the most vivid memories from your upbringing that has shaped you as a human being?
My upbringing was under the sign of change from a young age. My Parents had me young whilst at University, and I had moved thirteen times around Great Britain by the age of seven when we moved to France. I remember arriving at our new home one-hour South of Paris and three days later, starting French school without having till then heard a word of French. I felt different in a special sort of way, which set the tone.Though I was shy I have been driven, since as far as I can remember to support others and contribute, always taking on voluntary roles at school and then in other environments.
Though very loving, in my eyes my Father called the shots, and though I now realize how strong my Mother is and the roles are somewhat reversed, I felt for my Mother who often took the brunt of his impatience. This influenced my desire for independence, and belief in women empowerment.
I am the eldest of four children and both parents had a career, I felt I had to battle for recognition, to prove my worth which created this feeling I always need to do more which still shapes me.
Arriving in the French school of the Hague, the Netherlands at the age of fourteen, I was THE STAR, coming from a big school in France to this tiny little community, I rocked the establishment (in good and bad) and created a lot of expectations that I guess I am still trying to fill.

You have over 20 years of writing and editing experience, combined with a Business degree and degrees in coaching and NLP. What has been your driving force when it has come to choosing your professional path?
Somehow when I look at the path, I feel that for a long time it chose me rather than the other way round.
I graduated with a French Baccalaureate from the French Lycée in the Hague and did not have a clue what to do, paralyzed by wanting to do it all. All I knew is I wanted to be a force for good. I started studying sociology in the South of France, but it was not what I expected, then moved to Paris, Strasbourg then Vienna before finally attending the University of Wales reading German, Spanish and Business Studies. During my year at the Business university of Granada (Southern Spain) I met who was to become my Dutch husband and after graduation started working as a management consultant around Europe based in the Netherlands. In 1997 we had our first child, he joined the Foreign Service, and we left for our first posting, three years in Cameroon, Africa where I worked as consultant for the Embassy, running their small-scale development projects for women and developed a passion for empowering women. This was followed by a posting in Uganda, where I worked in Sales and PR before moving with our 3 children to Senegal where I took over a women’s group which grew from 50 to 250, organized large scale events and with the proceeds funded countless projects empowering women and children;  and discovered a talent for public speaking.

Arriving in Berlin for our five year posting I discovered coaching: a perfect outlet for my results-oriented approach, the five languages I had picked up, my cross-cultural awareness and people skills and embarked on a two year accreditation (with distinctions) followed by an NLP accreditation driven by a desire to help women like me find their path when the paths around them changed with each new posting. I was fed up with recreating the wheel each time and wanted to build something I could grow wherever I lived.

In parallel my passion for writing continued. I have held a diary since the age of 12 and delighted in writing letters, stories which I have shared with a broad audience over the years.
In Africa I did some creative writing courses with the Open University and wrote various articles, whilst compiling countless pages of our adventures  for future publication.
My passion for words was to become a large part of my business, again almost by chance. A friend asked me to edit his PHD  which led to another and another, followed by web content, books, translating etc. and I loved it. In the meantime, I went through a (friendly) divorce and had put coaching on the side. Individuals, companies approached me with their content to be written, edited, or translated and I worked for the magazine “Global Connection”. I am passionate about people and believe we all have a story to tell, in a dream world I would combine my love of travel with my interest in people and comb the world looking for stories to share.

You have lived and worked in many different countries, what is the major impact this experience has created in your life?
Indeed, I calculated once I had moved 22 times and have till now never lived more than 7 years in one place. I am only now realizing the impact of this. I guess it could best be described as a restlessness, an urge to discover more, an insatiable appetite for adventure, for challenge and a need for variety. I have no “home country”; people are my anchors and home is where my heart is at that moment.  When we divorced this hit me: where should I go? It made sense to stay in Holland as the Ministry was covering the international school. But this summer our last child graduated from high school…

You have said, ”I believe flowing Connection and Communication with our deeper being and with others is the key to happiness and fulfillment”. What exactly do you mean with that?
During a retreat to find the red thread through my life I discovered that I genuinely believe that we find deep happiness and fulfillment when we are truly connected and communicating honestly, with ourselves and with others. I coach those searching for who they truly are and the second pillar, and the one where I am so grateful for Global Woman which accounts for 90 % of my clients, focuses on improving connection and communication with others.I love it being entrusted with a woman’s message and helping her text shine through. I am a big believer in getting written communication right. When we present orally,  our voice, gestures, tone, energy help us convey our message and perfection is not needed. In writing however it is. You know how annoying it is to read a book full of mistakes, it cuts the flow, slows you down, and makes you doubt the professionality and credibility of the writer. We do judge a book by the cover.  I remove the mistakes and more than that, depending on your target audience, I find the words, the tone, the style that will resonate directly with them making magic to ensure your message hits the target and responds to their “pain”. I also translate from French and Dutch into English. My belief became my mission.

Moving past this current world crisis, what are your hopes when it comes to the communication between people, both on a national and international level?
It is in times of crisis that we put aside our petty grievances and realize how much actually unites us. The Corona crisis has brought us together like never before since the war, and unites us as human beings, sharing the same basic needs, love for our children, common planet, and hope for a happy tomorrow. On national and international level but also on everyday level. In forced confinement we have slowed down, with less to do, we have had more time to think and question. Neighbors having lived side by side for years are reaching out to each other, our common fear superseding all differences in nationality, religion, age, wealth, education. My hope is that once everything starts gathering pace again, we do not forget what we have discovered and how it made us feel, that we decide to cherish and continue building on humanistic values.
This is wonderfully aligned with the Nichiren Buddhism that I practice. Based on compassion, on personal growth and responsibility, putting service in our community in action, embracing our differences and living in awareness of the oneness of man and his environment.

I believe we need to end with asking the question everyone might be wondering … The name of your company, The Kennedy Connection, does make you think of the famous Kennedy family. Do you have a real ”connection” with them as well?
Aha! A girl needs to keep some mystery! I am grateful for my name; I believe it has strongly influenced who I became. The prominence, the glamour of the “other Kennedys” I have gladly taken on, the fact that there is also a fair share of tragedy and dubious circumstances regarding many of them I choose to leave aside. Suffice to say we all originate from Ireland.

Julie Kennedy is a Communication specialist and can be contacted at www.thekennedyconnection.com