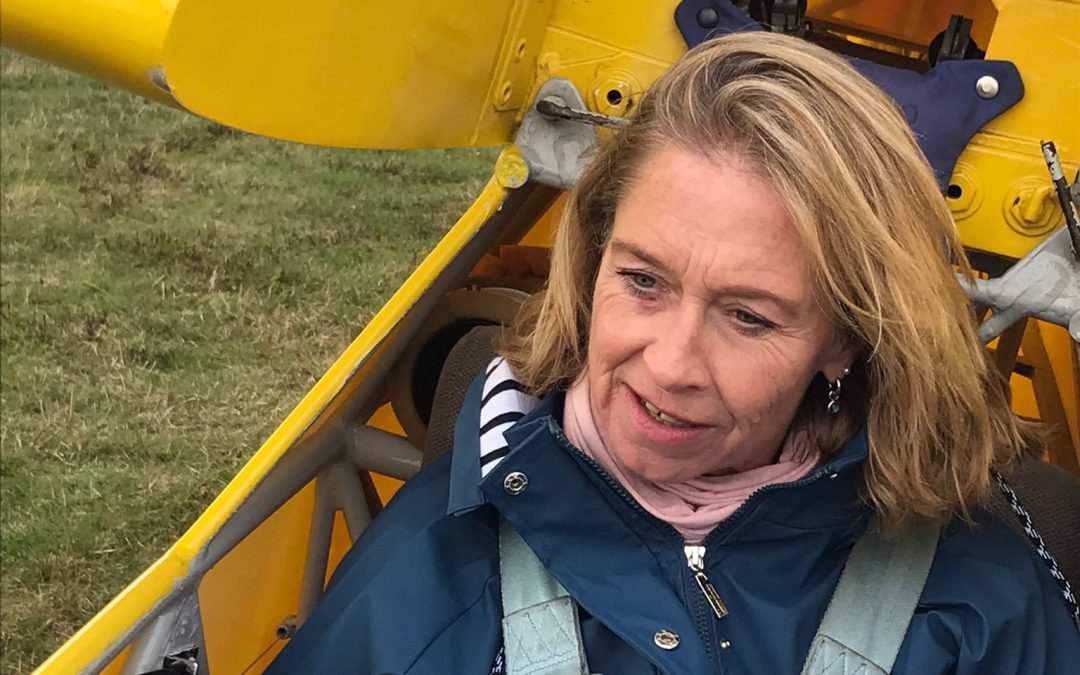 Sometimes things are just meant to happen! Olivier had a voucher for an introduction to gliding and knowing it was 1,5 hours’ drive away in the beautiful area of the Veluwe (in NL) I went along for the ride and enjoyed discussing adrenaline with him from the comfort of my ‘accompanying’ role.

I was looking forward to writing my diary with a coffee in the sunshine at the club in Terlet where he was being collected to drive to the landing strip.

A goodbye/good luck kiss later I had not even picked up my pen than he was back to say that I could come too. So off we set to the large clearing a few minutes away where a few gliders were delicately posed on the grass like large dragonflies and a group of men sat peacefully on plastic chairs enjoying the unseasonably warm October day in a very serene atmosphere.

Once there I enthusiastically listened in to the preparations with Olivier and at some point heard myself saying that I had actually wanted to try too (I guess thinking it was far too late as I hadn’t reserved) but before I knew it, it was all set, so I didn’t really have time to take in what I was doing.

Still, as my turn approached was I slightly apprehensive? Yes, I was, but one thing I have found out over the years is that I am not actually frightened by the action when I am a passenger (same when I skydived) what does terrify me is doing something wrong, others judging me etc (still work in progress).

Our friendly instructor introduced himself and explained how it works, how our flight will go and went through the safety checks with us. The planes are minimalistic, like a plastic bubble atop two beautiful wide-spanned wings. Some there were one seater and others duo, like the one we both went up in (in turns) where one sits behind the other with the instructor in front. Since it was an instruction plane, we, at the back, also had a joystick and two rudder pedals and 4 indicators in front of us, for altitude, speed, ascent and descent speed.

The procedure is simple. You strap into the safety belt and the bubble is shut.

A glider can either be pulled up by another plane or winched automatically which is what we had. An assistant on the ground shows (through the window) the pilot the cable for inspection and hooks it under the plane before lifting his hand and giving the winch operator (located 1,5 km away) the thumbs up. An engine on the ground then activates the winch which starts rolling up propelling the plane from 0 to 100 kms/hour in 3 seconds. Once the plane reaches a certain height (500 m altitude) the winch releases and spirals back to the ground (where it is collected and taken back) and you glide on.

As a passenger you seem at take-off to be heading up almost vertically which is both thrilling and rather unsettling as I felt as if I had left my guts behind though to be honest, I much preferred the thrust to the sort of floating feeling once the winch released where I felt rather nauseous, but maybe it was light claustrophobia. I mentioned it to the instructor back on the ground and he pointed to the vomit bags in the side pockets of my chair so some must have it a lot worse than me!

But once we had stabilised and I relaxed the effect is wonderful, you seem to be hovering then obviously flying in the air. You can fly up to (or maybe even beyond 6 hours) if the thermals are good which sounds almost unbelievable. We knew that was not the case today and did two tours of seven minutes which I found reassuringly enough. The main thing that comes to mind is how effortless it all seems. There you are suspended and transported 100 metres above ground by nothing else than a stream of air and an aerodynamic piece of plastic with one stick and two pedals.

On our second round we were allowed to get a feeling for navigation by taking over the joystick which is very responsive. So, we circled around admiring the spectacular view and nature in all its autumn finery and before I knew it we were heading back down but it felt gentle and we landed smoothly before rolling to a stop. Quite surreal actually.

It seems so dangerous but once you have learned you can actually fly alone from the age of fourteen!

Would I do it again? Probably not as the feeling of nausea did stay with me a while after the second tour yet I thoroughly enjoyed it and had been wondering how I could challenge myself for my 55th Birthday!

It is also very affordable here, we paid 60 euro each for our two flights which is in strong contrast to my 350 euro skydive for my 50th.

I am all for broadening our horizons, in this case literally! Enjoy being alive!